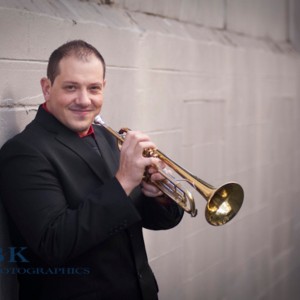 in a day or more
Purchase a background check

John W. B. is a graduate of the University of Washington's School of Music with a BA/BM in Trumpet Performance under the direction of Allen Vizzutti. John's influences come from Miles Davis, Tom Harrell, Kurt Elling, Duke Ellington, Stan Kenton, Count Basie, Maynard Ferguson, Doobie Brothers, Tower of Power, and many other great musical legends.

On top of performing in Paris, Berlin, Japan, New Zealand, and Australia, John has played for many jazz giants such as: Randy Brecker, John Fedchock, Dick Oattes, Dave Pietro, and Seattle based musicians, Mark Taylor and Jay Thomas.

John has recently moved to New York City with wide range of available performances and music projects including John's debut album on vocals and trumpet.

Private instruction is a great opportunity for a student to learn the details to playing trumpet and making music. Playing trumpet can be fun and enjoyable. It can also be one of the most physically demanding instruments to play.

The physical aspect of playing can be the most crucial. Learning to play with proper air support, embouchure set, correct finger technique, and posture will not only make playing easier, but will also progress your abilities faster and more efficiently.

The other part of my lessons involve learning the mental focus needed to make practicing efficient and beneficial, coping with performance anxiety, and establishing "mental confidence" while performing.

All these aspects take time and practice to acquire, but are very important for a trumpet player in order to make trumpet playing fun, exciting, and rewarding.

If you would like to message John Benedetti, please login as a student. We do not require any payment information to message our tutors.